I hope everyone is keeping well!

For this week, I am having everyone participate in a little all-school project

I am sure a LOT of you have seen some form of this before:
In 1999, statues began to appear across Chicago.  There was also a return of it in 2019 just last year.

These statues were then placed in public places, such as parks or on street corners, at train stations, or in front of shops.  All together, the different statues would be part of the same “installation” or “series” of art, spread out across the entire city.  These pieces would be put out to see for months for everyone to see.

And these statues were of, of all things,…Cows.  You might have heard of it; Cows On Parade!

While the first of the “parades” was actually done in Switzerland, over in Europe by a man named Walter Knapp, of the most famous of these parades was also the first one in America.

Two Chicago men, Peter Hanig and Lois Weisberg brought the idea over to America and released the cows!

The cows were found all across the city, and it was a game for visitors to go and try and find every cow.  You might have found one in front of the Field Museum, the Shedd Aquarium, at every stadium, park, and everywhere in between.

Best of all- the Cows were later sold off at auction, and the money went to a whole variety of charities.

It became such a popular event that copy-cats parades are still made to this day.  You can find them in all kinds of places:  When Ms. S was in college, she helped to make a statue for the art department in the shape of the school mascot, a cougar.  She has seen park benches painted, giant acorns, figures of people, and more.
In a small town in Missouri that she visited about 5 years ago, they had these old pianos that people painted and left out in the streets for anyone to play, which was super fun!

They are popular as art pieces.  But the biggest accomplishment that these works create, in Ms. S’s opinion, would be that they create a sense of community.  Coworkers, neighborhoods, famous artists and just the average every-day person would work together to create their piece, their story.  No two are ever the same, and in fact it is because they are different that they work so well together!
Three is also a short clip from last year- it was the 20 year anniversary return of the works.
https://www.youtube.com/watch?v=iLgjy4nODdM

So, here is the task:
Doves are the messengers of God, and so I have a picture of a dove for all of you.

Your goal is NOT to make it look like a bird.

Your job is to use whatever coloring things you have at hand, and I want you to create a dove that is YOUR part of this community.  Use colors that you like.  Draw things you like, things that are about you.  Make them colorful, make them detailed.  Take your time with them, and make them nice- because Ms. S. plans to have them up throughout the school.

There is a open sky in the background- I do want you to color it as well!  No all-white backgrounds please! It could be a night sky or a sunrise, a crazy polka dot mess or full of rainbows and clouds.  Use it to help your bird soar!

There is a little box in the corner- in it I want you to write your name, first and last, your Grade, and give your piece a title.  Artists title their pieces to match their work, and to help viewers understand their work.

When you are done, send me a photo at J_Szalko@stdamianschool.org
I will add it to the display in the hallway! 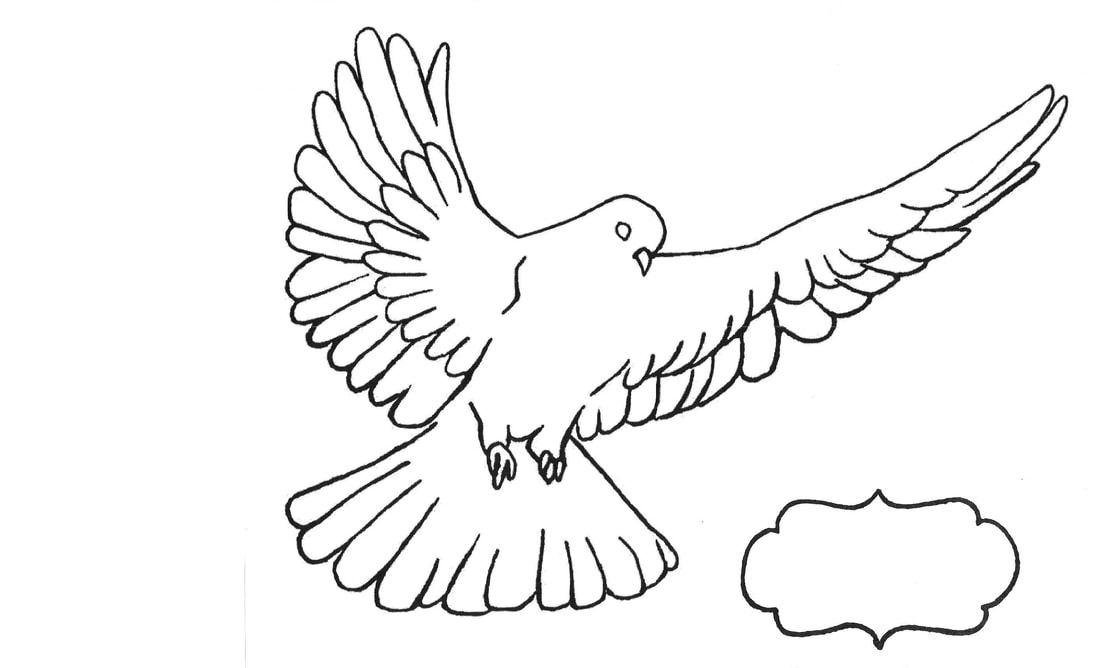